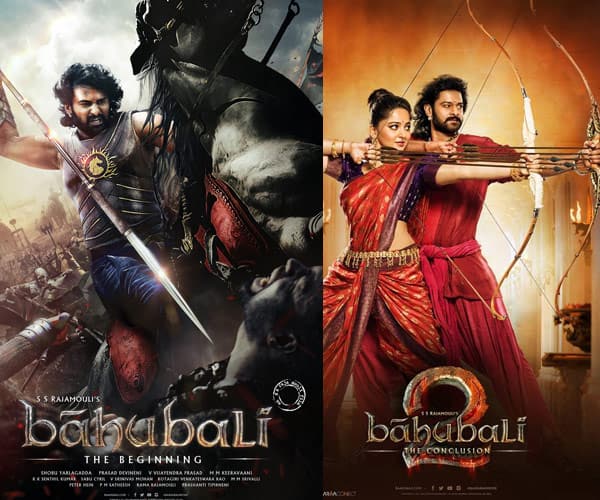 I’ll summarise both movies in a few lines each.

Bahubali: The Beginning:
Destiny thrusts a simple tribal boy into a world he did not know about. Unknown people treat him as a God. Why?

Bahulbali 2: The Conclusion:
A charismatic man inspires every person around him, at the same time maintaining humility and righteousness and sacrifices personal gains for the general good

Hinduism in a good light:

This is probably the only movie I have found that portrays Hinduism and Hindu culture in a good light. Otherwise it has become a trend in Bollywood to mock Hinduism and elevate others. Case in point- How many movies have you watched where the villain (or one of the villains) is a Hindu Pandit with a large ‘tika’ on his forehead? Isn’t he malicious, cunning and painfully orthodox? Bollywood’s definition of ‘secularism’ is to demonize Hinduism. Bollywood is Hinduphobic and Bahubali is a slap to this mentality.

Vividly I remember a scene in the first movie where Mahendra Bahubali and his brother are supposed to sacrifice a bull each to the goddess for glory in battle. His brother does it with no hesitation but Bahubali cuts his palm instead, sacrificing his own blood; refusing to slay an innocent being. Guess which brother wins the most glory?

The movies are presented in Ancient India, in the time of Kings and their Kingdoms. War, Love, Conspiracy, Family and Feuds are depicted. Some people disliked the over-the-top action scenes (I did, too) with overpowered heroes having super strength and can jump so high it seems they are flying. This is a fantasy fiction story, in the same genre as Harry Potter and Lord of the Rings. So there are bound to be some supernatural scenes.

The second movie in particular shows the protagonist as man who speaks up when wrong deeds are committed, always works for the good of the society and puts himself last. He follows his own honor code and stands by his words.

The movies follow an excellent storyline with some nice plot twists thrown in. All animals are animated (obviously) and scenes- both real and computer generated, look great.

These movies are aired on TV every now and then. Some streaming sites also have them to watch on demand.

Bookmark this site and tune in on Sundays at 11am and Wednesdays at 5pm for new articles!